Spanning 11 time zones and extending across the whole of northern Asia and almost half of Europe – nearly halfway around the Northern Hemisphere – the Russian Federation is the world’s largest country, covering nearly twice the territory of Canada, the second largest. It is almost 9,000 km (5,600 miles) east-west, and almost 4,000 km (2,500 miles) north-south.

Russia borders many countries – North Korea, China, Mongolia and Kazakhstan to the south, and in the east, Azerbaijan and Georgia in the Caucasus, as well as Ukraine, Belarus, Poland, Lithuania, Latvia, Estonia, Finland and Norway in the west. It also borders the Arctic and Pacific Oceans, the Baltic Sea, Caspian Sea and the Black Sea.

The far north of the country is frozen Arctic desert, south of which is tundra and south of that is forest covering almost half of the country. Further south still are wooded steppes and in places semi-desert. However, much of the country endures intensely cold winters, and permafrost makes settlement and road-building difficult.

The Ural Mountains run north to south dividing Russia between Europe to the west and Siberia to the east, with the two largest cities (the capital Moscow and St Petersburg) both situated in Europe. 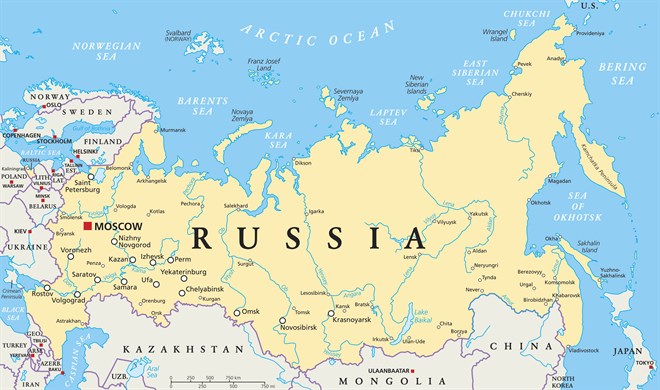 Following the passage of the Russian constitution into law in 1993, Russia is formally regarded as a republican, federal, multi-party and democratic state. Legislative authority resides within two branches of government inside the Federal Assembly – the State Duma (lower house) and the Federation Council (upper house) – whilst the Head of State (the President) holds executive power.

The sitting Russian President, Vladimir Putin, was re-elected in 2018 with 77% of the popular vote – which was a significant majority. For further information, visit: http://www.cikrf.ru/eng/news/cec/39412/.

Presidential elections are held every six years, whilst the Russian Duma is re-elected every five. Political consistency best characterises the Russian political system, with the governing Conservative party ‘United Russia’ having held power in the legislative assembly since 2003. Despite Putin running as an independent candidate in 2018, he too previously was a representative of the United Russia party.

Tension between the UK and Russia has heightened following official statements condemning recent events in Ukraine and accusations of Russian involvement with the Skripal poisoning in March 2018. See: https://www.gov.uk/government/speeches/pm-commons-statement-on-national-security-and-russia-26-march-2018 for further details. However, British exports continue to be popular in Russia and trade relations are gradually improving, with bilateral turnover growing during the period between January and June 2018 by 19%. For further details visit: https://www.rusemb.org.uk/economy/.

The UK and other EU Governments, as well as the UK’s international partners, condemned Russia’s interventions in Ukraine and the illegal annexation of Crimea. As a result, targeted EU sanctions were imposed in 2014.

Full details about the restrictive measures that have been implemented can be found at: https://www.gov.uk/government/news/doing-business-in-russia-and-ukraine-sanctions-latest. If in doubt, businesses should consult the UK Government’s Business Support Helpline on 0300 456 3565 or contact the DIT team in Russia at: tradeinvestmentmoscow@fco.gov.uk.

For further details of the recent six-month extension to the sanctions, see the EU Council’s press release of 21st December 2018 at: https://www.consilium.europa.eu/en/press/press-releases/2018/12/21/russia-eu-prolongs-economic-sanctions-by-six-months/.

Russia is a country of concern for human rights issues. The UK Government has issued a report taken from the FCO Human Rights and Democracy Report 2014, which can be downloaded in full at: https://www.gov.uk/government/publications/russia-country-of-concern--2.

Russia covers one seventh of the world’s land mass and spans eleven time zones. Due to its size, it has a wide range of climates, including sub-tropical in the south, and permafrost in the far north. This has resulted in varying levels of development and differing social and economic factors.

As it is so large, Russia has abundant natural resources, plus an economy encompassing modern infrastructure, high-tech production and a diverse range of industries, supplemented by state-supported business incentives.

To help create a favourable business environment, the Russian Government has been taking measures to reduce the administrative burden on investors and entrepreneurs, including the process of regulatory reform which is still taking place at both federal level and in the regions.

Despite having the smallest population of all the BRIC (Brazil, Russia, India and China) economies, in per-capita terms Russia is the wealthiest. However, its domestic supply of consumer goods and services in many sectors is still underdeveloped.

It does, however, have a large and growing middle class of discerning consumers who have respect for UK-made brands, as well as a young and well-educated workforce and a growing number of small and mid-sized businesses. Despite the challenges of distance and climate, it also has good transport links and logistics with other markets in the Commonwealth of Independent States (CIS). More information on the CIS can be found at: http://www.cisstat.com/eng/cis.htm.

Russia has a diverse range of regions which are keen to attract international investment, and some – such as Kazan and Kaluga – have introduced significant incentives for business. Together with the major investment and modernisation programmes from the state, there are many opportunities for UK business, expertise and technology. For further details and links to the regions in Russia, visit: http://rustrade.org.uk/eng/?page_id=40.

A strong macroeconomic policy framework has been put in place by the Russian Government during the last few years, and as a result the economy is now beginning to recover from the recession of three years ago.

Growth is expected to remain robust, as a recovery in consumption should be driven by improved confidence following the easing of financial conditions such as greater disposable income and increased employment opportunities after the recent pension reform. However, in the absence of structural reforms, growth prospects may remain subdued. For more-detailed information visit: http://www.oecd.org/eco/outlook/russian-federation-economic-forecast-summary.htm.

According to its latest World Economic Outlook report, the IMF has raised its projections for Russian economic growth for 2019 from 1.5% to 1.8%. See: https://www.imf.org/en/Countries/RUS#ataglance.

According to the report, the current changes in projections for Russia are largely due to higher oil prices and recovering domestic demand and that priority areas include improving governance and property rights, reforming labour markets, enhancing the institutional infrastructure and investing in innovation and infrastructure, to ensure further economic growth.

In 2011 Russia entered into a Customs Union with Kazakhstan and Belarus, which by 2015 had evolved into the Eurasian Economic Union (EAEU). The EAEU now consists of a Customs Union additionally including Armenia and Kyrgyzstan.

For information on the EAEU, its central regulation of technical standards and its plans for eventual free movement of goods, services, capital and labour visit: http://www.eaeunion.org/?lang=en.

Russia became a full member of the World Trade Organization (WTO) in 2012, and as a result has now committed to simplifying its import licensing procedures, changing duty rates to simplify access to the Russian services market, apply agreed food safety measures and improve the protection of Intellectual Property.

For further information on the WTO, visit: https://www.wto.org.

Some bilateral co-operation and trade support activity has been affected following Russia’s interventions in Ukraine and the illegal annexation of Crimea, as well as accusations of Russian involvement in the 2018 Skripal poisoning. The European Union’s (EU) restrictive measures have been targeted (see: https://www.gov.uk/government/news/doing-business-in-russia-and-ukraine-sanctions-latest), yet outside of those specific areas there remains significant opportunities for UK companies.

Russians have a high level of respect for UK-manufactured luxury retail brands. However, some Russians are reluctant to purchase foreign goods or services; although they are aware that British export products are innovative and among the highest quality available.

These factors, together with the increase in numbers of small and medium-sized businesses, and their readiness to use international legal and accounting standards, mean that significant business opportunities do remain. This is particularly the case in areas such as e-commerce, consumer goods, luxury, education and machine tools, and sectors such as agriculture, metals and chemicals.

Contact a DIT export adviser at: https://www.great.gov.uk/contact/triage/location/ for a free consultation if you are interested in exporting to Russia.